Ministry of Culture, Sport and Youth of Georgia

The Dimitri Shevardnadze National Gallery will host an exhibition of Irakli Parjiani’s works together with Niko Pirosmani’s paintings from November 2, 2021 to February 15, 2022.

Irakli Parjiani was a laureate of the Niko Pirosmani Award. Presenting the works of two great artists in one exhibition space offers viewers the opportunity to dive into the compelling context of 20th century Georgian art. This project, which unites distinguished masters, is remarkable in terms of discovering parallels and differences, individuality and influence, evaluation of the artistic process, and a rethinking of cultural heritage.

Irakli Parjiani restored religious themes in Georgian art – a tradition that had been discontinued after Pirosmani as a result of the enforcement of Soviet ideology. The works of these two artists are completely different regarding their artistic and stylistic features. Nevertheless, they both demonstrated a similar position related to the expression of humanist and existential issues through culture.

The exhibition will present 80 works (paintings, graphic works, and illustrations) by Irakli Parjiani drawn together from the museum and private collections. Some of the works (approximately 30 pieces) will be displayed for the first time. A catalogue will also be published following the exhibition.

Irakli Parjiani is one of the principal figures of 20th century Georgian art and the leader of post-Soviet Georgian painting (since the 1980s), who defined the standpoint, style, and direction of his generation. His creative career spanned over 17 years, beginning with his graduation from the Academy of Art until his death at the age of 41. He is associated with rehabilitation of the interrupted tradition of religious painting in Georgian art, as well as the introduction of a contemporary movement – his individual scheme of abstraction and shape modification. He became an outstanding figure of Georgian art – a unifier of traditional and modern cultural systems; a keeper of hidden knowledge about the universe. At the end of the 20th century, Parjiani managed to create a world that was filled with covert tragedy, mysticism, the inevitability of vanity and, at the same time, a festive expression of life: a category of beauty that is associated with eternal values. 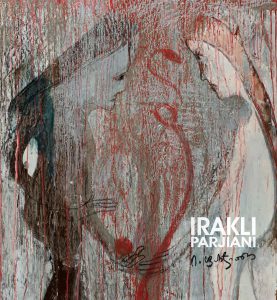